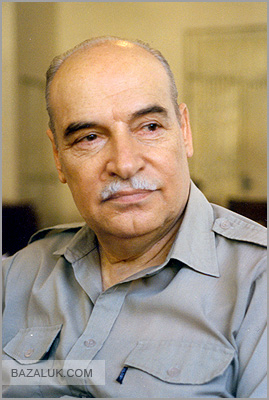 In 1951 he finished Sukhumi 2nd man's secondary school of a name of A.S. Pushkin with a gold medal.

In 1956 he graduated from philological faculty of the Sukhumistate pedagogical institute of a name of A.M.Gorky with gold medal.

In 1956-1958 – the teacher of the Sukhumi Georgian-Russian State Pedagogical College.

In 1963 at Tbilisi state university he defended the dissertation on competition of a scientific degree of the candidate of philosophical sciences on the subject "About the Nature of Human Knowledge" in which first developed in details the category "knowledge" as the central gnoseological category in its relation to truth and practice: "The knowledge checked in practice, is truth", respectively the knowledge which hasn't been confirmed in practice, there is a delusion (till 1963 in one philosophical directory, the dictionary or the encyclopedia of those years the category "knowledge" wasn't mentioned at all). In both cases – truth and delusions – previously there has to be some more or less accurately formulated knowledge in its such forms, as sensual, evident, art or abstract knowledge then this knowledge is estimated as true (truth) or false (delusion). Related to this, the classification of types and the forms of human knowledge located in their natural dialectic order from a sensual form of knowledge (feelings, perceptions, representations) to an evident form of knowledge (models, cards, drawings), further to an art form of knowledge (a sculpture, painting, music, literature) and, at last, to an abstract form of knowledge (schemes, symbols, speech statements). Thus the element of direct sensuality gradually decreases, but with the same gradualness, through intermediate evident and art forms of knowledge, the abstractness element is increases, so as a result the speech statement acts as a pure form of human thought (it is in detail stated in the book "Science and Art", Tbilisi, 1977).

In the years 1965-1973 - associate professor of department of Philosophy of the Sukhumi Pedagogical Institute named after M. Gorky.

During stay in Czechoslovakia started developing actively a vacuum problem, as subquantum level of a matter, as specific optical environment with an indicator of refraction of light, changing from the Metagalaxy center to its periphery (cosmological optical heterogeneity of metagalactic vacuum). The new cosmological concept of the birth and evolution of metagalactic substance in scales of an observed Metagalaxy (R=1028centimeters) is offered. In strong gravitational fields rotating "cosmological black holes", in their ergosfer there is a birth of material particles and primary plasma (70% of hydrogen and 30% of helium). Protogalaxies make drift from the Metagalaxy center – to its periphery (" recession of galaxies", "Universe expansion") and the standard scenario of emergence of stars and planetary systems is developed. In R radius from the center of the Metagalaxy "the life belt" where there is now our Galaxy – the Milky Way - settles down. As the beginning of these researches are served publications in Czechoslovakia in the Slovak language: "Space vacuum as real physical space" (the Filozofia magazine, Bratislava, 1985, No. 5) and "The basic cosmological principle and its modern interpretation" (the Filozofia magazine, Bratislava, 1986, No. 2) and in Ukraine ("Historical destinies of the theory of air in the light of the modern theory of vacuum". In the collection "Sketches of History of Natural Sciences and Equipment", Kiev, 1988, release 37). In 1990 in Sukhumi there was the first edition of the book "Vacuum", a final version in the book "Vacuum. The vacuum theory of substance and field", the second edition, processed and added, Tbilisi, 2008). The role of the International philosophical and cosmological society (IFCS, Kiev) in distribution of ideas of this cosmological concept in "Sententiae" magazines and "Philosophy and cosmology" is great.

In 1994-2006 – the dean of faculty and the head of the department of philosophy and sociology in the Sukhumi branch of Tbilisi state university of a name of I.Dzhavakhishvili (in Tbilisi).

In the book "Philosophical Outlook" (Tbilisi, 2003) proved idea that in the history of philosophy there are three main historical types of philosophizing: 1) scientific (stsiyentistsky) philosophy – outlook, 2) anthropological (existential) philosophy – attitude) and 3) religious (theological) philosophy – the world discernment which develop in parallel in each historical era, satisfying various world outlook requirements and aspirations of people; he developed own option of system of categories of scientific philosophy; in details he developed the new philosophical category "inevitability" – in the general system of categories of a determinism.

Throughout the scientific and pedagogical activity he held responsible positions in system of the higher education, paid much attention of the pedagogical theory and practice: participated in creation of five textbooks and educational-methodical grants on philosophy for students in the Georgian, Russian, Bulgarian languages, published three lecture courses on philosophy and sociology in the Russian and Georgian languages, and also published three books for youth: "What is new and old. Conversation for youth" (Sukhumi, 1976), "Studying youth during a scientific and technological revolution era" (Sukhumi, 1989), "Modern problems of the higher education" (Tbilisi, 2011).

More than 100 journal articles and as much newspaper – in the Georgian, Russian, English, French, Bulgarian, Czech, Slovak, Azerbaijani, Abkhazian languages. Especially it should be noted the article "To a Question of Dialectic Logic" (the Philosophical Sciences magazine, Moscow, 1990, by No. 12) which caused the heated debate on the Internet, it was repeatedly quoted and still keeps the value.

L.G.Dzhakhy in "The international directory on philosophy "