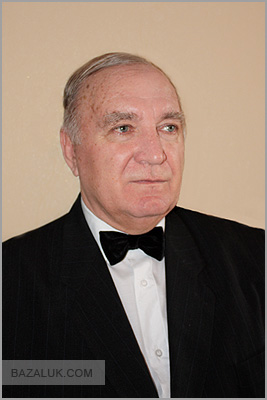 Rybalka Valentin Vasilevich (January 1, 1947) is a Doctor of Psychology, Professor – was born in Yuterbog, Germany, in a military family. The professor of the Poltava V.G Korolenko State Pedagogical University – in combination (since 2008), the adviser of the director of Gifted Child Institute of the NAPS of Ukraine (since 2008), the Сhief Researcher of Laboratory of psychology of creativity of G. S. Kostyuk Institute of Psychology NAPS of Ukraine, the Chief Researcher of Institute of Social and Political Psychology of NAPS of Ukraine The member of Scientific and advisory council on social and psychological questions of the National commission of experts concerning protection of public morals (since 2009).

Education
In 1962 he finished 8 classes of Novomoskovsk comprehensive secondary school No. 11 of the Dnepropetrovsk area.
In 1966 graduated from the Dnepropetrovsk technical school of automatic equipment and telemechanics.
In 1965-1967 he was working as the technician-researcher in Design office of the aviation equipment in the city of Kursk.
From 1967 to 1972 studied at faculty of psychology of the Lomonosov Moscow State University, after termination of whom moved to Kiev and he held a position of the engineering psychologist in ergonomics laboratory (the head of the laboratory – V.M.Bondarovskaya) the Kiev research institute of the peripheral equipment of "Elektronmash" Scientific and production association.
Since 1974 - a graduate student, and in 1977 - junior researcher at the Institute of Psychology of Ukraine.
In 1982 he defended the master's dissertation "Psychological characteristics of the synthesis process in the design of technical objects" (the research supervisor - V.A.Molyako).
Since 1985 he was wirking as the senior research associate of laboratory of psychology of labor education, the manager of the Republican center of psychological service of an education system at Institute of psychology of Ukraine (1991), senior (since 1995) and leading (2007-2009) the research associate (in combination) of laboratories of advisory psychology and psychotherapy of Institute of psychology of G.S.Kostyuk NAPS of Ukraine. He took part in the State program "Children of Chernobyl" (1991-1993).
Since 1993 - the senior research associate of Institute of pedagogics and psychology of professional education of NPA of Ukraine.
In 1995-1998 - the doctoral candidate of the same institute.
In 1998 he defended his doctoral dissertation on "personal approach to school education high school students" (scientific advisor - G.A.Ball).
Since 1998 - the head of the laboratory (since 2001 - department) psychology of labor and vocational training of the same institute.

Awards
Excellence in Education of Ukraine (1996).
The winner in the nomination "Academic Psychology" of an All-Ukrainian action by public recognition in psychology (2006).
Medal "For Scientific Achievements" of MES of Ukraine (2006).
Certificate of honor of the Verkhovna Rada of Ukraine (2008).
Sign "Honourable professor of Open international university of development of the person "Ukraine" (2008).