December 2, 2010 at Kyiv University of Tourism, Economics and Law hold the International scientific-practical conference: "SPACE TRAVEL: RESEARCH, EDUCATION, PRACTICE". The conference was organized by the Kyiv University of Tourism, Economics and Law, National Space Agency of Ukraine, Institute of State and Law named after V.M. Koretsky, National Academy of Sciences of Ukraine (International Centre for Space Law), the International Society for Philosophy and Cosmological, Kharkov Planetarium named after Y.O. Gagarin and other organizations.

The conference was in a philosophical comprehension prospects of space tourism as a promising component of the promotion of the tourism sector, analyzing the ideas of space exploration that are relevant for the further development of science, practice and education, the study of personality formation planetary and space type. 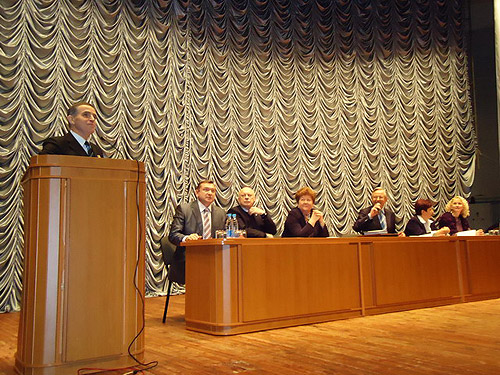 Introductory remarks to conference participants asked the Rector of the Kyiv University of Tourism, Economics and Law, Doctor of Pedagogical Sciences, Ukrainian Academy of Political Science Fedorchenko Vladimir Kyrylovich. He underlined the importance of space tourism for the further development of science, practice and education. He expressed hope that KUTEL occupy an important place among universities in Ukraine to investigate prospects of space travel. Mentioned the need to include the topic in the educational process of training in tourism.

Considerable interest was the research report "The Future in research and space exploration" (philosophical reflections cosmonaut) First astronaut of Ukraine, Hero of Ukraine Leonid Konstantinovich Kadenyk. He pointed to the complexity of training space tours, their technical support, the need for proper physical, psychological and scientific training of future astronauts. Sharpened the focus on the perspectives of development of space tourism as an important economic force in space exploration, to promote scientific knowledge among the public. Leonid Konstantynovich proclaimed the leading role of Ukraine in space exploration. By all scientific ratings Ukraine ranks 6 th place among 150 countries working in this field. Her research and industrial capacity to collect as separate units for spacecraft and make it a full installation. An example serves as a space shuttle Buran. 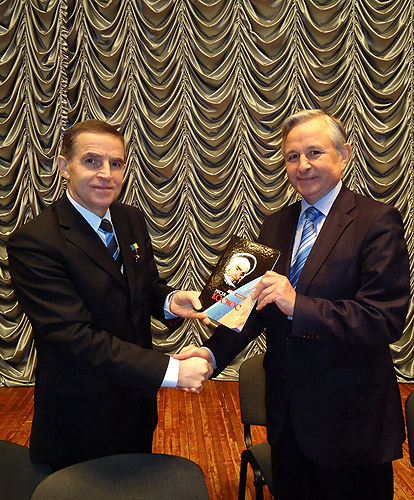 The report "The international legal principles in the development of space tourism" was the Deputy Director of the International Centre for Space Law, Doctor of Law, professor, academician of the Academy of Sciences Natalia Rafaelivna Malysheva. She stressed the important role of lawyers in the Ukrainian system of space law, said that it is in Ukraine at the Institute of State and Law, Academy of Sciences of Ukraine in 1998 was created the International Centre for Space Law, which took over the functions of the legal regulation of questions concerning space exploration in the CIS. "Today, space law in Ukraine", - underlined the reporter, "compared with other states represented at the highest scientific and professional level. As part of the report was formulated from a legal point of view the essence of the concepts "space tourism", "astronaut" (astronaut), and more.

Report of the President of the International Society of philosophical and cosmological, head of the Department of Philosophy and Social Sciences, Kyiv University of Tourism, Economics and Law, Doctor of Philosophy, Professor Oleg Bazaluk "Space travel: modern scientific views" was dedicated to the development prospects of space tourism. In his speech the speaker said that in terms of modern scientific research of human desire to penetrate the territories caused by the feature space is his psyche. Modern neuroscience prove that human psyche seeks to realize itself as in everyday life and materialize their inner artistic potential in large-scale projects. Because space exploration is a natural desire to leave the mental level of planetary forces at the level of space. This allows each generation to acquire a new level of excellence to the inner realization of projects.

Vice-President for Research Kyiv University of Tourism, Economics and Law, Ph.D., professor, corresponding member of NAS of Ukraine, Honoured Scientist of Ukraine Victor S. Pazenok made a scientific report "Formation of planetary and space personality type". From the perspective of philosophy of education, said Victor S., personality formation-planetary space type is abstract, the ideal image of man's future, which should seek any modern educational system. In his opinion, the personality type of planetary and space are able to master high-quality and large-scale environmental space environment and to understand the universe in general.

The first rector of the Kyiv University of Tourism, Economics and Law, Candidate of Science, Professor Nadegda A. Fomenko presented a research report “New guidelines for the training of tourism professionals”. They emphasized the need for innovative approaches in the training of tourism. The importance to the subject of space tourism within the course turyzmoznavchyh disciplines as an essential component of the educational process. This subject called to ensure innovation in the tourism sector, be an example of creative activity and mobility in the introduction of new tourism product. 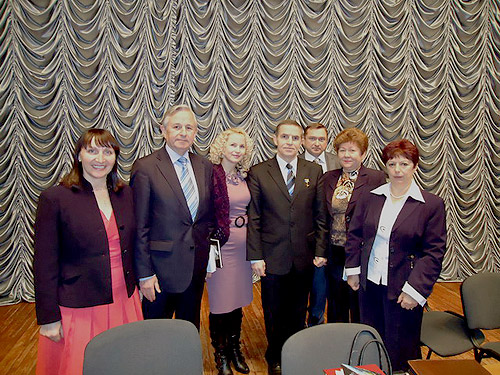 Roundtable participants exchanged views expressed his view on the problems stated in the topic.

Overall it should be noted that the International Scientific Conference in KUTEL was in a friendly atmosphere and has become a significant step in comprehending the problems and prospects of space tourism. After the conference will be released Scientific Papers.